BRN threatens to walk out of peace talks

The Barisan Revolusi Nasional (BRN) separatist group has threatened to walk out of the peace talks process unless its five demands are endorsed by the Thai parliament. 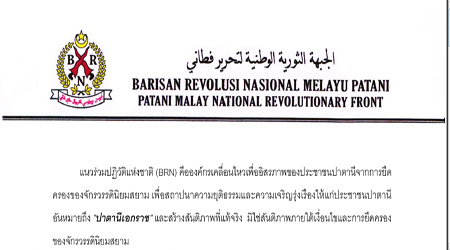 The BRN’s threat and warning were contained in a Thai-language statement recently obtained by the Isranews agency.

The statement referred to a resolution of the BRN’s revolution council which was posted on the YouTube page on August 6.  The resolution calls for the Thai parliament’s approval of the BRN’s five demands.

The statement said that the objective of the BRN was to establish an independent Patani and to achieve genuine peace with guarantee on various aspects such as the dignity and quality of life of Patani people in accordance with the resolution of the General Assembly of the United Nations.

The government has not rejected outright the BRN’s five demands but only said it would take them into consideration.

While peace talks appear to be in the limbo, violence has continued.  On December 3, four Thai men hunting for  fiddler crabs (Uca forcipata) in mangrove forest in Ban Kare Na, Tambon Bang Khao, Nong Chik district of Pattani, were shot dead by suspected insurgents.  The others escaped to safety and the third went  missing.

Police said that the seven Thai men went to the mangrove forest to look for fiddler crabs for sale.  However, six suspected separatists, riding in three motorcycles, followed them unnoticed to the forest.

Once the crab hunters disembarked from their pick-up truck and headed for the mangrove forest, the separatists opened fire with M16 assault rifles and pistols, killing four of them.

The separatists then escaped in the truck which police suspected might be turned into a car bomb.

On the following day in Kapor district of Pattani, a retired teacher and headmaster of Ban Po Toey school, was shot dead as he was riding in a motorcycle.  The gunman, said police, was riding on the pillion of a motorbike.