The sad tales of two women in Narathiwat 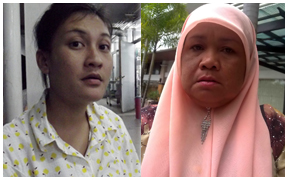 Mrs Chitra Payom and Mrs Maska Jeh-uma are long-time residents of Narathiwat who don’t know each other but, due to uncontrollable circumstances,  share one thing in common – that is both have lost their loved ones in the continuing senseless violence in the deep South.

A housewife who does not have any income of her own, Mrs Chitra lost her husband, Mr Pamorn Pornpanich, a local reporter of Sue Samut newspaper in Narathiwat, on September 23 – one week after he was badly injured in a bomb blast in Sungai Kolok when he rushed to the scene to cover the incident.  Five people, including three Malaysian tourists and a boy, were killed at the scene and several, including Mr Pamorn, were injured.

Recalling the fateful day on September 10 when suspected insurgents detonated three bombs at three different intervals, Mrs Chitra said she and Mr Pamorn were in their home which was not far away from the scene of the explosions.

“When the first explosion was heard, Pi Pamorn (the name she affectionately called) grabbed his camera and drove his car out of the house.  It had always been his journalistic instinct.  But when he arrived there, the second bomb exploded and he took a direct hit with his body badly burned.  A rescue worker was also killed,” said Mrs Chitra.

However, she disclosed that initially she did not know her husband was among the injured although he was away from home for two days since the bombings.  She said she thought he might have been in the office following the incident which was a big news in the province.

But on the third day of his absence from home she started to become worried and made calls to their daughter, his friends and finally to the district hospital where she was told the bad news.

She explained that the officials could not get hold of her because they didn’t have her phone number and, also, the cellphone of her husband was destroyed in the bomb blast.

“At first I didn’t recognize him.  But he appeared to recognize me from his eyes.  He could not speak,” said Mrs Chitra, adding that her husband eventually managed to write to communicate with her.  His hand-written note read: “I will not be dead”.

Pamorn’s condition got worse and had to be sent to Yala provincial hospital for treatment where he eventually succumbed to his death on September 23.

The reporter’s death was not the first biggest loss for the poor housewife.  Her first husband, a Muslim, was shot dead several years ago before she met Pamorn.  The case of her first husband is still pending with the court.

With the loss of her second husband, Mrs Chitra admitted that she didn’t know what to do next because she is the housewife and has no means to make a living.

As for the violence in the deep South, she admitted that she was very pessimistic and did not believe that peace would be restored in years to come.

Separately, Mrs Maska Jeh-uma has her own sad tale to share.  She lost two of her five sons and a daughter-in-law.  The first son was killed in the Tak Bai incident and her second son, Abdulloh Arbukhari, went missing without any traces since December 11, 2009.

Abdulloh who was a suspect in the huge gun robbery case back in 2004 was also a witness in a case in which several policemen were accused of torturing to extract confessions from the suspected gun robbers.  He was under the witness protection programme of the Department of Special Investigation when he went missing while returning home for the end of the Ramadan feasting month.

But the poor woman’s ordeal appears to be not over yet.  She disclosed that a district official recently approached her and asked to have her grandson, born to Abdulloh and Jehrohani, taken the orphanage for proper raising.

“I strongly feel that there is very unjust.  My son went missing without traces, my daughter-in-law killed and now they want to take away my grandson.  I understand that they want to help.  But this is very painful for me.  If these happened to the other people, I wonder whether they will commit suicide or not,” said Mrs Maska.